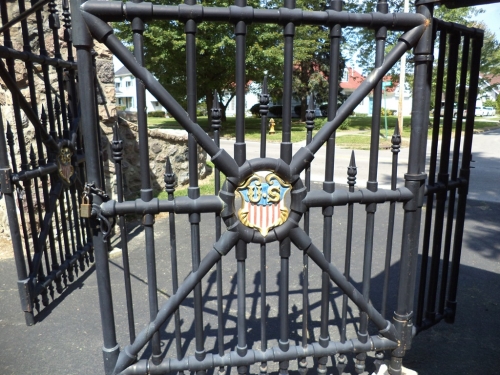 In 1873 the front entrance to the residence was the gateway on Buckland Avenue, now known as the Buckland Gateway. When he laid out the drives, Hayes changed the front entrance to the northeast triangle of the estate, known as the Croghan Gateway, which has been a main entrance. Other entrances are the Harrison Gateway at the corner of Buckland and Cleveland avenues; the Grover Cleveland Gateway opposite the McKinley Memorial Parkway; the McPherson Gateway at the corner of Hayes and Cleveland avenues, honoring General James B. McPherson of Clyde and Captain Samuel Thompson of Fremont; and the Memorial Gateway in front of the Rutherford B. Hayes Library, honoring Edgar Thurston, U.S. Army, killed in France in World War I, George B. Meek, U.S. Navy, first American killed in the Spanish-American War, and all Sandusky County men who gave their lives in the defense of their country in the Spanish-American War and World War I.

In 1928, Congress authorized the donation of iron gates at the entrance to the White House grounds on West Executive Avenue to the state of Ohio, to be placed at the several gateways to Spiegel Grove by the Ohio State Archaeological and Historical Society, now The Ohio Historical Connection.