The Prints and Photographs Collections provides a rich resource for the study of the Hayes Presidency, the Hayes family, America during the Gilded Age, and Ohio and the Great Lakes during the nineteenth and early twentieth centuries.The institution encourages the use of these materials for the exploration and understanding of the Hayes Presidency and America during the nineteenth and early twentieth centuries. The collection is comprised of more than 100,000 images that include nearly every photographic process. Prints in the collection include, engravings, lithographs, chromolithographs, broadsides, and posters. Access to the collections is provided on-site and through its on-line resources.

To view a sampling of images from the collections, choose SELECTED IMAGES FROM THE COLLECTIONS

The core of the Rutherford B. Hayes Photograph Collection is the set of forty-four albums carefully compiled by the nineteenth president and his family.The 7,000 images reflect the threads of his varied political and personal interests. The albums contain formal portraits of Hayes, his family and friends; the U. S. Cabinet; leading nineteenth-century political, military, and literary figures; visiting foreign dignitaries; Native Americans; and Civil War comrades. Combined with the candid photographs of Hayes and the Hayes family during the post-presidential years at his Spiegel Grove estate, the collection provides a visual record of the life of this Gilded Age president. 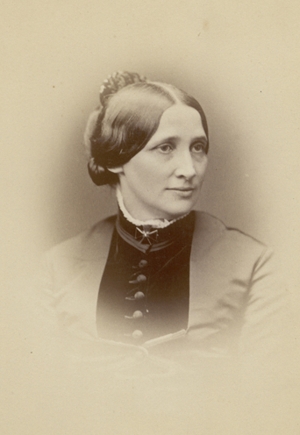 The Webb C. Hayes I Photograph Collection contains approximately 3,750 images -photographic prints, glass negatives, and flexible negatives - spanning the years from Hayes’ infancy (ca. 1860) to shortly before his death in 1934. A large portion of the collection is images of Col. Webb C. Hayes, including formal portraits and candid shots. Noteworthy are the Kodak circular photographs taken in 1889 in Wyoming during the last of ten annual game hunts with General George Crook.

The collection reflects and is dominated by Hayes’ strong interest in military affairs, including his participation in the First Cleveland Troop, Spanish American War, the Philippine Insurrection, Boxer Rebellion, China Relief Expedition, Russo-Japanese War, and WWI. Individual images - professional and amateur - feature Colonel Hayes; military personnel, activities, movements, and fortifications; and indigenous subjects and scenes at each location. Souvenir pictures from many of the countries are also included.

The collection includes numerous photographs of Webb C. Hayes and wife Mary Miller Hayes, friends, traveling companions, and scenic views of the United States, Europe, South America, Africa, and Asia. The collection also documents the colonel’s efforts to commemorate the military conflicts in which he served, including military memorials, monuments, plaques, and tablets erected at battlefield sites, particularly in China and Cuba.

Also reflected in the collection is Hayes’ strong interest in the Hayes family, Spiegel Grove, and Fremont, Ohio. There are candid images of family activities and organizations participating in celebrations on the grounds of Spiegel Grove. To a lesser extent, the collection documents Colonel Hayes’ role and participation in the creation of Memorial Parkway in Fremont, Ohio. To view a detailed description of the collection, choose Webb C. Hayes I Photograph Collection. 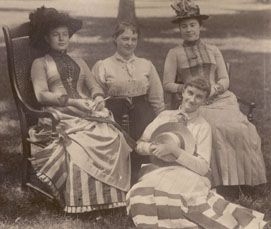 A resident of Fremont, Ohio, and a cousin of President Rutherford B. Hayes, Lucy Elliot Keeler was a journalist, author, and the unofficial photographer of Hayes during the post-presidential years. Her collection consists of more than 1,885 albumen and cyanotype prints of varying quality, size, and shape. Dated, identified, and arranged chronologically by Keeler in sixteen 6 ½ x 8 ½ inch albums, the photographs date from 1887 to 1929. Pictures of friends, family, gardens, homes (including interiors), historic sites, and Keeler’s travels dominate the collection. Of particular note are the candid images Keeler took of Rutherford B. and Lucy Webb Hayes and the Hayes family at Spiegel Grove during the post-presidential years. Keeler also photographed Hayes relatives, including the Birchard A. Hayes family (Hayes’ eldest son); the Rutherford H. Platt family in Columbus, Ohio; the Russell Hastings family in Bermuda; and the Bigelow family in Tarpon Springs, Florida.

Keeler photographed the Erie Islands; Cedar Point; the Sandusky River; and Fremont, Ohio, residences, churches, streets, public buildings, parks, and community events until well after the turn of the century. Most of her travel photographs were taken in New York state, New England, and along the eastern seaboard. However, there are some pictures from Florida, Illinois, Michigan, Mississippi, California, and a 1911 tour of the Mediterranean.Keeler included photographs of Bejing (Peking) and Shanghai, China, taken by Colonel Webb C. Hayes, K. P. Loring, and members of the Fitch family, who served as missionaries in China. Select the feature Lucy E. Keeler Photograph Collection for information on individual photographs within the collection. 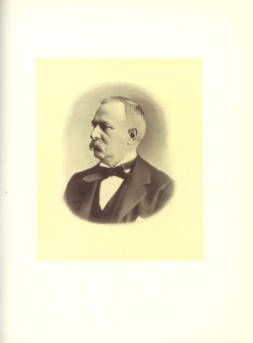 The Portrait Collection contains more than 3,000 images of individuals, family groups, and members of organizations. Nearly all of the portraits reflect the major collecting areas of the institution: Rutherford B. Hayes and the Hayes Family, the Gilded Age, and Ohio (with a particular emphasis on Northwest Ohio and Lake Erie’s shoreline communities).The collection includes images of U. S. presidents, noted nineteenth-century statesmen, political figures, authors, diplomats, reformers, and those who saw service in the Civil War. Formats include tintypes, albumen prints, cartes de visite, cabinet cards, and lithographs. While many of the images are originals donated, others are reprints. Select Portrait Collection to view all names of individuals whose images appear in this collection.

The late local historian Charles E. Frohman of Sandusky, Ohio, collected more than 14, 000 historic photographs documenting Lake Erie’s Western Basin, its shoreline communities, and the Erie Islands. The collection includes images that span nearly one hundred years, dating from before the Civil War. From the Civil War prison on Johnson’s Island, the early years of Cedar Point Amusement Park, and Put-in-Bay’s Hotel Victory to the fishing industry, lighthouses, harbors, and ice harvesting, the collection chronicles the everyday activities of residents whose lives were shaped by Lake Erie. Included in the collection are photographs by A. C. Platt; W. A. Bishop; Otto Herbster; Ernst Niebergall; and the Mound Studio. Photographic processes include tintypes, stereoscopic views, albumen prints, and black and white prints. Many original glass plate negatives are housed with the collection. Select Charles E. Frohman Photograph Collection for a complete subject listing of this collection.

Commercial photographer, Ernst Niebergall, who lived in Sandusky, Ohio, photographed the communities along the shoreline of Lake Erie.From ice harvesting and railroads to early aviation and island leisure activities, the Niebergall photographs richly depict the everyday lives and activities of residents of Lake Erie's southern shoreline communities. The black and white photographs, the majority taken between 1909 and 1918, provide a record of communities in transition as old methods gave way to advances in industry and technology. Following Niebergall's death in 1954, Charles Frohman preserved 4,000 photographs and included them in his donation to the Rutherford B. Hayes Presidential Center. Hundreds of Niebergall’s images can now be viewed on the web site and the OhioLINK Digital Resource Commons under the title Lake Erie's Yesterdays. 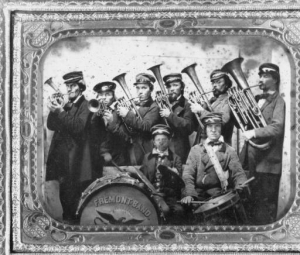 The Sandusky County, Ohio Local History Photograph Collection contains more than 3,000 prints, photographs, and drawings dating from 1850 to 1984. Nearly every photographic process is represented in the collection. Images from Sandusky County’s towns and villages are included; however, the collection is dominated by pictures taken in and around Fremont, Ohio. The photographs are arranged according to subject. Some of the subjects include towns and villages, events and celebrations, buildings, businesses, residences, schools, organizations, street scenes, bridges, railroads, churches, and utilities. To view a a detailed description of the collection, choose Sandusky County Local History Photograph Collection.

The Thaddeus B. Hurd Photograph Collection includes more than 5,000 photographs dating from 1855 to 1988. The collection can be divided into two broad categories: 1) images of Hurd, his friends, classmates, immediate and extended family members, Hurd ancestors, and Hurd ancestral home sites;2) images of Sandusky County, Ohio, (with particular emphasis on Clyde, Ohio) that include individuals, families, school groups, civic organizations and events, businesses, cemeteries, and historical markers.

Hurd took many of the photographs during the course of his life, particularly those of friends, classmates, immediate family, architecture, historic sites and Hurd home sites in New York and New England. The bulk of the photographs are original, but the collection also includes prints reproduced by Hurd from originals loaned by relatives and area residents. Nearly every type of photographic process and format is represented within the collection, including daguerreotypes, ambrotypes, tintypes, albumen prints, 35 mm slides, glass negatives, lantern slides, and some silver gelatins.

To use the searchable database that contains more than 60,000 descriptive entries, choose the Thaddeus B. Hurd Photograph Collection title in left-hand column.

The Reinhard Grob Glass Plate Negative Collection is the work of professional Fremont, Ohio, photographer Reinhard Grob, who photographed several generations of Sandusky County, Ohio families between 1875 and 1925. The more than 2,000 glass plate negatives represent the largest surviving evidence of his work.Taken between 1900 and 1910, the collection spans a relatively short period of Grob’s career as a professional photographer. Nearly all of the images are formal studio portraits of children, couples, grandparents, babies, and family groups. Many were taken on the occasion of baptisms, confirmations, weddings, and family gatherings. Select the Reinhard Grob Photograph Collection to access information about individual photographs .

In 2007, thousands of black and white prints appearing in the Fremont, Ohio News-Messenger from 1973 to 1993, were donated. The News-Messenger covered and continues to cover events in Fremont, Sandusky County, and the neighboring towns of Elmore, Port Clinton, Oak Harbor, and Sandusky. A small group of the images from 1973 have been identified, processed, and scanned.Through a cooperative effort with OhioLINK’s Digital Resource Commons, they can be viewed online in the collection titled Images from the Fremont News-Messenger, 1973 - 1993.

The institution holds more than 2,000 images of individuals, events, and locations, both in the United States and in other countries. The broad subject matter of the collection is typical of stereoscopic views produced in the nineteenth century: commercially produced images of landscapes and landmarks and candid photographs from amateur photographers preserving family memories. Many of the views, however, were donated to President Rutherford B. and Lucy Webb Hayes during Hayes’ term as president of the United States (1877 - 1881). They include White House interiors, Hayes’ travels, Native Americans, students of the Carlisle Indian Industrial School, railroad construction, and western landscapes. Access subjects and more information about the stereoscopic collection by selecting Stereoscopic Collection. 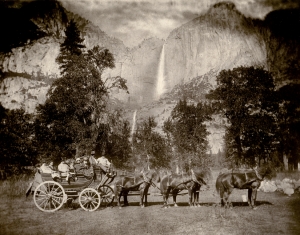