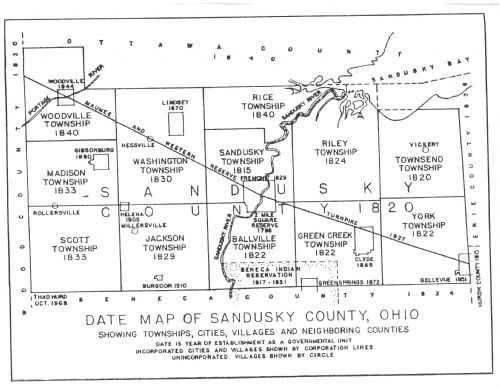 Sandusky County, Ohio, was part of the large Indian Territory established in northwestern Ohio by the Treaty of Greenville in 1795. Within this territory the Indians gave to the federal government, for military use, a tract of land two miles square at the first rapids of the Sandusky River. This land, known as the Two Mile Square Reserve, is now occupied by the city of Fremont. Here was located Fort Stephenson of the War of 1812, so gallantly defended under command of Major George Croghan on August 2, 1813. Around 1815, settlers began to arrive here, and a small village soon grew up around the fort.

In January 1815, the Ohio legislature established Huron County, formed from the Firelands, the west end of the Connecticut Western Reserve. This act attached to Huron County, for governmental purposes, lands adjoining it on the west, including the Two Mile Square Reserve, or Lower Sandusky as it was generally known.

The inhabitants of Lower Sandusky at once prevailed on the Huron County Commissioners to establish them in a township. This was done in August 1815. The new township, called Lower Sandusky Township, comprised all the lands lying north of the present south line of Seneca County and south of Lake Erie, bounded on the east by the west line of the Western Reserve (now Huron and Erie Counties), and on the west by the present west lines of Seneca, Sandusky, and Ottawa Counties, the line extending north through present Lucas County to Lake Erie. This included all of present Seneca and Sandusky Counties, most of Ottawa County, the eastern tip of present Lucas County and the western tip of present Erie County south of Sandusky Bay. Actually, at this date this new township was still Indian Territory.

In 1817, the Indians sold to the Federal government most of their lands in northwestern Ohio. T his included nearly all of the already-formed Lower Sandusky Township. Excepted was the Seneca Indian reservation, lying east of the Sandusky River in present Sandusky and Seneca Counties. Also in 1817, the federal government platted and put on sale the land of the Two Mile Square Reserve. Land ownership in the village of Lower Sandusky was now legally established. Until now, the inhabitants were technically squatters on government land.

Dates of formation of subsequent townships are shown on the map above. Note that Croghan Township disappeared completely. The name of the hero of Fort Stephenson now remains only as the name of a street in Fremont. Sandusky Township is about a fourth of its original size.