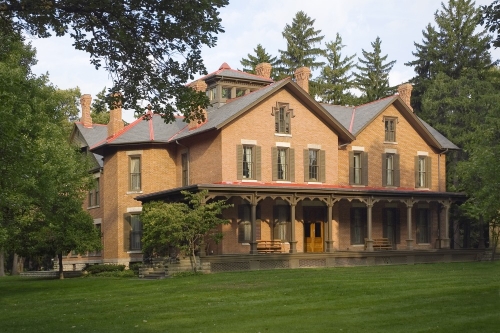 Although the home of President Rutherford and First Lady Lucy Hayes at Spiegel Grove was not actually a stop on the Underground Railroad, it is included in the network because of Rutherford Hayes’ work in defending runaway slaves while he worked as an attorney in Cincinnati.

"While Hayes is not remembered as one of the most avid abolitionists in Ohio, his story is compelling because of the level of transformation he underwent,” said Dustin McLochlin, Hayes Presidential Library & Museums historian. “He was raised to dislike abolitionists, only to make the defense of fugitive slaves part of his career in the 1850s. This is a story we have not highlighted well enough, and we are happy that it is receiving more attention through this network."

Two cases where Hayes defended runaway slaves have been recorded.

One involved a slave named Lewis who did not wait for the verdict of his case and decided to make a run for it. Hayes wrote that Lewis “slipped out under the table at which we were sitting, and crawled along under the legs of a row of fellows, and was taken to a buggy in a lane nearby, and was spirited on.”

Hayes’ most important case involved a young girl named Rosetta Armstead in 1855. Working with Salmon P. Chase, a well-known attorney who would go on to serve as Ohio governor and secretary of state under Abraham Lincoln, Hayes made the closing argument for Armstead, which reportedly resulted in “unrestrainable applause” from the courtroom audience.

Chase wrote that Hayes “acquitted himself with great distinction in the defense of Rosetta.” The court declared Armstead free under both U.S. and Ohio law.

In addition to defending Lewis and Armstead, Hayes also enlisted in the Union Army when the Civil War began. He was 38 and past the age of men required to go, but he felt too strongly about the Union’s cause not to fight.

Very early in the conflict, Hayes laid out his views on the slavery question, writing in his diary on Dec. 22, 1861: “We are at the same high call here today—freedom, freedom for all. We all know that is the essence of this contest.”

When escaped slaves surrendered themselves to Hayes, he ensured they were allowed to head north, even recommending some for employment on his uncle’s property of Spiegel Grove, which would become his beloved home later in life. He also trusted and encouraged the escaped slaves who made it to his regiment.

“Slavery is getting death-blows,” Hayes wrote. “As an ‘institution,’ it perishes in this war.”