A monster that appeared to be half-man and half-dog wielding a 2-by-4 terrorized a small Northwest Ohio town during the summer of 1972.

A mysterious creature resembling a sea serpent has been sighted throughout the centuries on Lake Erie.

Grassman, known in other parts of the country as Bigfoot or Sasquatch, continues to be sighted in parts of Ohio.

And the light of the headless rider’s motorcycle has startled teens looking for a scare near Oak Harbor, Ohio, for decades.

None of these things has been proven to exist. Yet people have believed in them and reported seeing some of them for generations. Where do these stories originate? What about them captures the public’s imagination?

These are some of the questions answered in the Hayes Presidential Library & Museums’ special exhibit “Ohio: An Unnatural History." This exhibit focuses on myths and legends from Ohio and feature the artwork of Dan Chudzinski, curator of the Mazza Museum at the University of Findlay and artist who has consulted on movies and other projects.

“In this exhibit, we are going to look at what folklore is and why it’s important,” said Kevin Moore, curator of artifacts. “We’re going to profile several mythical creatures and urban legends and appreciate the rich collection of folk tales, both old and new, that have developed in Ohio.”

The exhibit examines Native American legends and Ohio history to research the backstories of these legends. Chudzinski’s artwork will bring these creatures to life for viewers. His work will include life-size cutouts of the creatures and some of his sculptures of mythical animals he has created throughout his career.

“It is an honor and a rare treat to be exhibiting with the Rutherford B. Hayes Presidential Library & Museums, a literal stone’s throw from my childhood home,” Chudzinski said. “Throughout my life, I have sought out Ohio’s curious and unusual creatures, hoping to catch a glimpse of something truly spectacular. I am fortunate to have this unique opportunity to bring those creatures to fruition, which has proven to be extremely fulfilling to my inner four-year-old.” 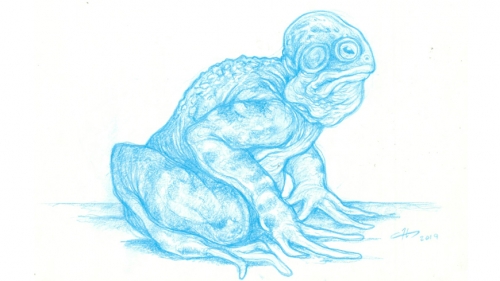 Access to the exhibit is included with regular admission. Hayes Presidential members are admitted for free.

Partial funding for this exhibit is provided by Decker Roofing and Gutter Solutions, Hanneman-Chudzinski-Keller Funeral Home, Walmart-Port Clinton and an anonymous donor.

To watch an online program about the exhibit given by Hayes Presidential Marketing/Communications Manager Kristina Smith for Sandusky Library's lunch session, visit https://www.youtube.com/watch?v=WblcdsHIg9s&feature=youtu.be.