President Hayes among the top presidents for the economy, researcher says

President Hayes among the top presidents for the economy, researcher says 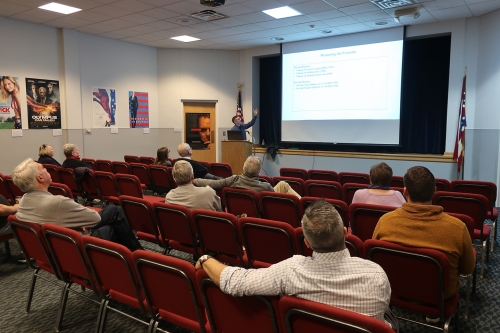 Rutherford B. Hayes was one of the top presidents in U.S. history for having a positive effect on the economy, an associate professor at the Georgia Institute of Technology said.

Mark Zachary Taylor, a political scientist, spent years working in science technology policy and collecting data on how the U.S. economy has performed over the years. He decided to take that data and see if it showed how the president historically affected the economy.

Taylor plans to write a book about his findings. He spoke Monday, Nov. 25, at the Hayes Presidential Library & Museums and focused on presidents of the Gilded Age, the era from about 1870 to 1900, including Hayes.

Four presidents tied for the No. 1 ranking as best president for the economy: Franklin Delano Roosevelt, Warren G. Harding, Rutherford B. Hayes and William McKinley.

So what factors make a good economic president? In the Gilded Age, Taylor found these factors:

Hayes scored well in these areas, Taylor said. He took an active role in the economy and pushing his vision for government. He strongly backed the gold standard for money, which calls for all paper money to be backed by gold instead of silver. Eventually, Congress overrode his veto of moving to silver, but he was steadfast in his views.

“Hayes wanted a cleaner government, a more honest government and wanted the gold standard,” Taylor said. “You can find these consistent views back across time.

Hayes also put emphasis on building relationships with major actors, from talking with reporters, having congressmen over at the White House and touring the country and meeting people.

Other Gilded Age presidents who scored highly in these areas were fellow Ohioans James A. Garfield and William McKinley.

To learn more about Taylor’s research and conclusions, visit mzak.net.