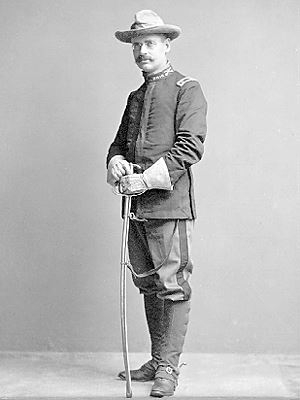 Webb Cook Hayes [1856-1934], the second son of Rutherford B. Hayes and Lucy Webb Hayes, was born in Cincinnati, Ohio, on March 20, 1856. At the age of ten, Webb joined his older brother, Birchard, at Spiegel Grove, Fremont, Ohio, which was the home of their great uncle, Sardis Birchard. Webb attended Cornell University from 1873 to 1875, leaving to serve as his father’s secretary during Hayes' third term as governor of Ohio. Following the presidential election, Webb again served as his father’s secretary. In 1881, Webb moved to Cleveland, Ohio, where he began his business career as treasurer of Whipple Manufacturing Company. Six years later, in association with Myron T. Herrick, James Parmelee, and W. H. Lawrence, he organized the National Carbon Company (later known as Union Carbide). Webb continued for many years as the vice president of the corporation. Webb’s greatest interests included military affairs, hunting, and outdoor life. As a child, Webb was frequently present in the Civil War camps of his father’s regiment. Here, he met General George Crook, whom Webb considered his godfather. Crook taught Webb to hunt the wild game of the Rocky Mountains during annual fall hunts that continued for nearly a decade.

Webb was a veteran member of the First Cleveland Troop, later known as Troop A, Ohio National Guard. He served with Troop A as the personal escort of all United States presidents from Hayes to Taft, and at the funeral ceremonies of three Ohio presidents (Hayes, Garfield, and McKinley). At the outbreak of the Spanish American War, Webb was commissioned a major in the First Ohio Cavalry and mustered into military service May 9, 1898. He accompanied Major General W. R. Shafter as part of the First Expedition against Havana. Later, he joined Shafter's regiment at Chickamauga Park, until embarking with the Fifth Army Corps for Santiago, Cuba. He served through the campaigns of Santiago de Cuba and the invasion of Puerto Rico. Despite wounds received during the crossing of the San Juan River, Webb took part in the assault on San Juan Hill on July 1, 1898. At the outset of the insurrection in the Philippines, Webb was commissioned lieutenant colonel of the 31st U.S. Infantry. After a harrowing 33-day voyage aboard the Manauense, Webb arrived in Manilla in late November, 1899. Within hours of landing, Webb led a rescue party to free U.S. soldiers garrisoned at Vigan Island. He was awarded the Medal of Honor for this act of heroism. Webb also participated in the Boxer Rebellion, the China Relief Expedition, and the Russo-Japanese War. He was instrumental in commemorating numerous Cuban and Chinese battlefields where American soldiers lost their lives. In World War I, Webb served as a special agent for the State Department until the French government’s withdrawal from Paris. Commissioned a full colonel when the U. S. entered the war, Hayes was sent to the Italian front where he served as a regional commander of the American Expeditionary Force.

In 1912, Webb married Mary Otis Miller Brinkerhoff, widow of Samuel Brinkerhoff and daughter of Anson and Nancy Otis Miller of Fremont, Ohio. Prior to United States’ involvement in World War I, Mrs. Hayes worked extensively with the Red Cross.

In addition to his world travels, Webb took an active interest in community affairs. He was instrumental in establishing Memorial Parkway, a living monument to Fremont, Ohio’s war dead. He and Mary also donated funds and land to help found Memorial Hospital of Sandusky County and the Mary Miller Hayes School of Nursing Home. Mary Hayes donated her home on Court Street to the Fremont Federation of Women.

Colonel Webb C. Hayes had many careers: soldier, adventurer, world traveler, philanthropist, and businessman. However, he is best remembered for his role as the moving force behind the creation of the Rutherford B. Hayes Presidential Library and Museums at Spiegel Grove, the first presidential library in the United States. He died July 26, 1934, at the age of 78. Mrs. Hayes died less than a year later. They are buried on the grounds of Spiegel Grove.