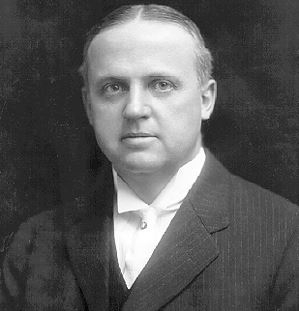 Scott Russell Hayes [1871-1923] was the youngest surviving son of President Rutherford B. and Lucy Webb Hayes. He was born February 8, 1871, in Columbus, Ohio, while his father was serving as Ohio's governor. His education began in the White House, where he received instruction alongside childhood friends of the family. Upon his parents’ return to Fremont, Ohio, he attended the Fremont schools, Green Springs Academy of the Western Reserve University, and the Scott Manual Training School of Toledo before enrolling at Cornell University in the class of 1890.

Scott began his business career at the First National Bank of Fremont, but a short time later, he became an employee of the Thompson-Houston Electric Company in Cincinnati, Ohio. In 1892, when the General Electric Company (formerly Thompson-Houston Electric Company) was formed, Scott Hayes was placed in charge of the Cleveland, Ohio, office and remained in that position until the latter part of 1894. During 1895 and 1896, he was in the electrical supply business with the firm of Hayes & Arthur in Cleveland. In 1897, he was appointed agent for the Scott Spring Company, Cleveland, Ohio, and a year later went to Chicago as a company representative. When the Railway Steel Springs Company was organized in 1902, he was transferred to the New York office as an assistant sales agent, subsequently serving as general sales agent and vice president. He resigned from the latter position in March, 1914 to become assistant to the president of the New York Air Brake Company. Scott Hayes later became vice president of that company.

Scott was married on September 9, 1912, to Maude Wright Anderson of Los Angeles, California. Scott purchased an estate overlooking Croton Dam. It became one of the most beautiful and notable country places in Westchester County, New York. In memory of and in distinction from his childhood home at Spiegel Grove in Fremont, Ohio, he named his own estate Spiegel Farm. The couple had no children. Scott and Maude Hayes visited Spiegel Grove for numerous celebrations, including on October 4, 1920, when they escorted President and Mrs. Warren G. Harding there .

In 1919, accompanied by his wife, Scott Hayes began what was to be an extensive business trip through Central and South America. However, they were shipwrecked and forced to abandon the vessel off the coast of Peru. Just before the ship sank, the women passengers were placed in a metal tanker, with a single Peruvian in charge, which was then followed by the male passengers in a second tanker. In a subsequent storm, the metal tankers were picked up by a vessel carrying wild animals. During the storm, tigers, boa constrictors and other animals broke loose aboard the rescue ship. Later, the passengers were rescued a second time and safely landed in Peru. Following his return, Scott Hayes suffered a physical breakdown. He died May 6, 1923, at the age of 52, from the effects of a brain tumor. He was buried at Oakwood Cemetery, Fremont, Ohio. Following his death, his widow spent several years traveling and living in Europe.