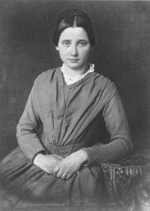 Lucy Webb Hayes was born in Chillicothe, Ohio, to Dr. James Webb and Maria Cook on August 28, 1831. Two years later, Dr. Webb died during a cholera epidemic in Kentucky, where he had gone to free slaves he had inherited. In 1844, the Webb family moved to Delaware, Ohio. Lucy’s brothers enrolled at Ohio Wesleyan University there, and although women were not allowed to study at Wesleyan, Lucy was permitted to enroll with her brothers. Several months later Lucy transferred to Cincinnati Wesleyan Female College and graduated from there in 1850. 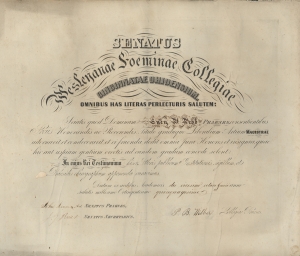 Lucy and Rutherford respected each other’s ideals and goals. When he practiced law in Cincinnati, Rutherford, influenced by Lucy’s anti-slavery sentiments, defended runaway slaves who had crossed the Ohio River from Kentucky. Lucy supported Rutherford’s decision to volunteer for military service during the Civil War. As often as she could, Lucy – sometimes with her mother and children – visited Rutherford in the field. She often assisted her brother, Dr. Joe Webb, in caring for the sick.

Lucy took an active interest in her husband’s political career. When Rutherford served in the United States Congress, Lucy worked for the welfare of children and veterans. During his tenure as governor of Ohio, she secured funding for an orphanage for the children of Civil War veterans.

Lucy was a helpmate during Rutherford’s term as President. She was the first President’s wife to be called First Lady. She did not serve alcohol at the White House, but in reality, it was Rutherford’s decision to forego alcohol. He realized the importance of temperance advocates to the Republican Party and the need for public officials to maintain a dignified demeanor in public. 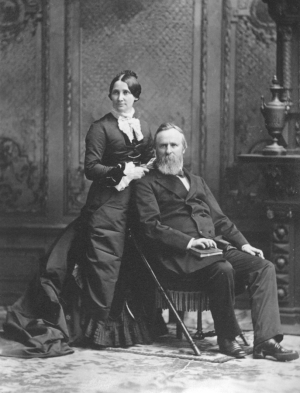 Lucy’s compassion and sincerity endeared her to Washingtonians. She regularly visited the National Deaf Mute College and the Hampton Institute where she sponsored a scholarship for an African American student. She continued to show concern for the poor by contributing generously to Washington charities. Fond of children, the White House was open to her children’s friends. She also started what has become a tradition: when the children of Washington were banned from rolling their Easter eggs on the Capitol grounds, they were invited to use the White House lawn on the Monday following Easter. Her young adult nieces and cousins were also guests at the White House, often assisting in the hosting of White House social functions. By the end of Rutherford’s term in office, Lucy was acclaimed the "most widely known and popular President’s wife the country has known."

The Hayes family returned to their Fremont, Ohio, home, Spiegel Grove, in 1881. Surrounded by family, friends, flowers, and fauna (at one time the White House was home to a mockingbird, two dogs, a goat, and the nation’s first Siamese cat), Spiegel Grove also housed many pets. Lucy spent her last eight years at Spiegel Grove. A few days after suffering a stroke, Lucy passed away on June 25, 1889. She was 57 years old. 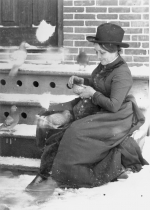