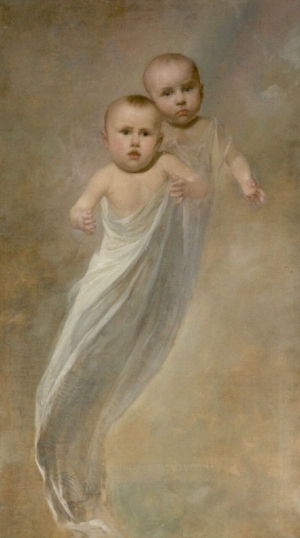 Joseph Thompson Hayes [1861-1863] was the fourth son of Rutherford B. and Lucy Webb Hayes and was born on December 21, 1861, at Cincinnati, Ohio. Lucy was assisted during the delivery by her brother Dr. Joseph Webb. At the time, Dr. Webb was serving as the surgeon of the 23rd Ohio Volunteer Infantry, which was the regiment his brother-in-law, Rutherford B., commanded during the Civil War. Affectionately called "little Joseph" by his brothers, Joseph Thompson was a "miniature likeness" of Rutherford B., according to Lucy.

On June 15, 1863, Lucy, her four sons, and her mother traveled to Camp White, West Virginia, where the 23rd Ohio Volunteer Infantry was quartered. Within a matter of days, Joseph Thompson became ill. He died on June 24, 1863. Hayes believed the cause was complications brought about by teething and dysentery. Joseph Thompson's burial on July 24, 1863, at Spring Grove Cemetery in Cincinnati, Ohio, was overseen by Lucy's brother, Dr. James Webb. Webb had resigned from military service because of poor health. In later years, Lucy stated that the "bitterest hour of her life" was when she stood by the door of the cottage at Camp White and saw "the boat bear the lonely little body away."