After earning a law degree from Harvard University in 1845, Rutherford B. Hayes briefly practiced in Lower Sandusky, Ohio (present day Fremont). It was while visiting relatives in Delaware, Ohio, that the young lawyer first met Lucy Ware Webb. The daughter of a Chillicothe physician, Lucy was a recent graduate of Cincinnati Wesleyan Women's College. She and Rutherford courted for two years before marrying in Cincinnati on Dec. 30, 1852. 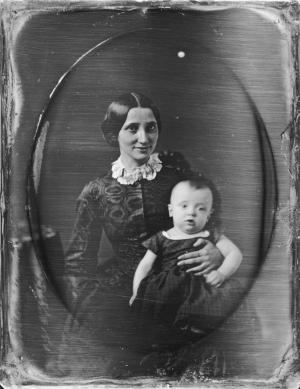 Webb Cook Hayes was born March 20, 1856, in Cincinnati. A career military man, he served in the Spanish American War, Philippine Insurrection, Boxer Rebellion, and World War I. Webb was awarded the Medal of Honor for his actions during the Philippine Insurrection. It was his efforts that led to creation of the Hayes Museum/Library. He died July 26, 1934, in Marion, Ohio. 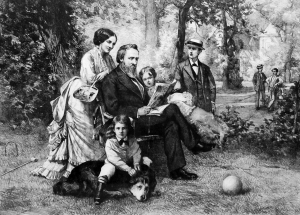 Joseph Thompson Hayes was born Dec. 21, 1861, in Cincinnati. His brief life came to an end June 24, 1863, while visiting his father's military encampment at Camp White, near Charleston, West Virginia.

Born September 29, 1864, in Cincinnati, while Rutherford B. Hayes was away fighting in the Civil War, George Crook Hayes was named for one his father's commanding officers. He was the second of three Hayes children to die in infancy - on May 24, 1866, in Cincinnati.

Fanny Hayes was born September 2, 1867, in Cincinnati, and instantly became her father's darling. The only daughter of Rutherford B. and Lucy Hayes, she was 10 years old when the family moved into the White House. Fanny's marriage to Harry Easton Smith ended in divorce after 22 years. The couple had one child. After the death of Lucy Hayes, Fanny became her father's constant companion. She re-assumed use of her maiden name after the divorce. Fanny died March 19, 1950, in Lewiston, Maine. 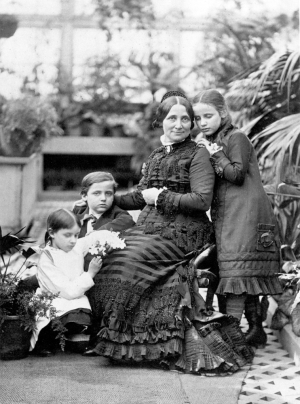 During the White House years, Scott Russell Hayes and his sister attracted much attention. Born February 8, 1871, Scott turned six years old a month before his father became President. Scott's adult life was spent as a business executive, working in electrical and railroad manufacturing. He died May 6, 1923, in Ossining, New York.

The last of the Hayes children, Manning Force Hayes was the only one born at Spiegel Grove. His brief life came to an end barely a year after it had begun. Manning was born August 1, 1873, and died August 28, 1874, in Fremont.