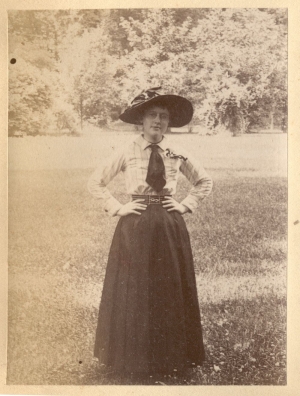 Fanny Hayes [1867-1950] was born on September 2, 1867, in Walnut Hills, near Cincinnati, Ohio. She was the sixth child and only daughter of President Rutherford B. and Lucy Webb Hayes. At the time of Fanny's birth, Hayes was serving his second term as an Ohio congressman. However, two months earlier, he had been nominated to the first of three terms he would serve as governor of Ohio. Fanny’s earliest years were spent in Columbus, Ohio. She entered school in Fremont, Ohio, when the Hayes family took up permanent residence at Spiegel Grove in 1873.

Rutherford B. Hayes was elected the 19th president of the United States when Fanny was ten years of age. Her formal christening took place at the White House on the occasion of her parents’ 25th wedding anniversary. Following her father’s term of office and the family’s return to Fremont, Fanny attended Miss Augusta Mittleberger’s boarding school in Cleveland, Ohio, where Molly, the daughter of James A. Garfield, was a classmate. From 1885 to 1887, Fanny attended Miss Sarah Porter’s school at Farmington, Connecticut. Nellie Arthur, daughter of President Chester A. Arthur, as well as Molly Garfield, attended Miss Porter’s school.

Following her mother’s death in 1889, Fanny became the constant companion of her father, sharing his interest in education and prison reform. After her father’s death, she worked with inmates at the Reformatory Prison for Women in South Framingham, Massachusetts. She traveled to Europe and visited Bermuda and New York, returning to Spiegel Grove each summer.

Fanny suffered a degree of deafness she believed to be hereditary. Concerned that any children she bore might suffer the same fate, she resolved never to marry. However, Fanny married her childhood friend and schoolmate, Ensign Harry Eaton Smith, U. S. N., at Spiegel Grove on September 1, 1897 - one day before her 30th birthday. Among the hundreds of guests in attendance were President William and Mrs. McKinley, members of the United States Cabinet, Ohio Senator Mark Hanna, and Colonel and Mrs. Myron T. Herrick. Ensign Smith was the son of Mr. and Mrs. Henry B. Smith of Fremont, Ohio. He received his appointment to the United States Naval Academy from President Hayes. Graduating with honors, Smith served a three-year tour aboard the gunboat Chicago. After his marriage to Fanny, he was stationed on the training ship Constellation at Newport, Rhode Island. In November 1897, Smith received orders for Honolulu. He later taught mathematics at the United States Naval Academy and spent time at the Naval Observatory. He and Fanny's only child, Dalton Hayes Smith, was born at Spiegel Grove on June 22, 1898. The family remained either in Annapolis or in the Washington, D. C. area until after World War I. In June 1919, Fanny was granted a divorce from her husband.

Between 1920 and 1935, Fanny lived in or near New York City; she traveled throughout Europe, and spent time in South Africa with her son, who worked for Standard Oil. During the last years of her life, Fanny Hayes resided near Lewiston, Maine, spending summers at her home at Bryant Pond on Lake Christopher and winters at the Hospice Marcotte in Lewiston. She died in Lewiston on March 19, 1950. She was 82 years old. Her son, Dalton, preceded her in death, passing away in January of 1950. Fanny was buried in the family plot at Oakwood Cemetery in Fremont, Ohio.