Rutherford B. Hayes, nineteenth president of the United States, was the fifth child born to Rutherford and Sophia Birchard Hayes. He was born October 4, 1822, at Delaware, Ohio, about two months after the death of his father. His parents had come to Ohio in 1817 from Dummerston, Vermont.

Young Rutherford and sister Fanny Arabella were raised by their mother and her younger bachelor brother Sardis Birchard. He was a successful businessman in Lower Sandusky (later Fremont), Ohio. Hayes attended school in Delaware and Norwalk, Ohio, and Middletown, Connecticut. In 1842, Hayes graduated from Kenyon College, Gambier, Ohio, valedictorian of his class. After a year of study in a Columbus law office, he entered Harvard Law School and received his degree in 1845. He began his law practice in Lower Sandusky. Not finding many opportunities there, he left in 1849 for Cincinnati, where he became a successful lawyer. His opposition to slavery drew him into the Republican Party.

In 1852, Rutherford married Lucy Ware Webb of Chillicothe, Ohio. She was the youngest daughter of Dr. James and Maria Cook Webb and a graduate of Cincinnati's Wesleyan Women's College. She was the first wife of a president to graduate from college. They became the parents of eight children. 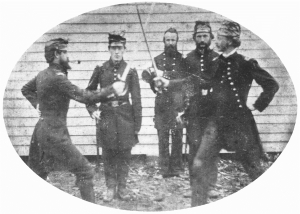 When the Civil War began, Hayes offered his services to the state of Ohio. Governor William Dennison appointed him to the rank of major in the 23rd Ohio Volunteer Infantry. He saw much active service, rising to the rank of major general. He was severely wounded on September 14, 1862, at the Battle of South Mountain. In 1864, while still in the army, he was elected to Congress (despite his refusal to campaign). Hayes did not take his seat until the Union had won the war. He was re-elected in 1866. The following year Ohio voters elected him governor. He retired at the close of his second term in 1872, and moved to Fremont in May 1873. After winning a third term in 1875, the Republican Party chose Hayes as its presidential candidate. He won the 1876 election only after the creation of a special commission to decide disputed electoral votes. Because of the tension surrounding his election, Hayes secretly took the oath of office on Saturday, March 3, 1877, in the Red Room of the White House. 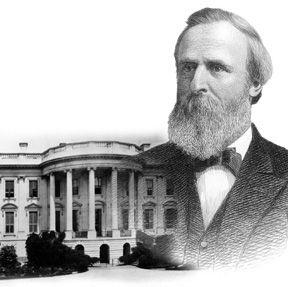 President Hayes worked tirelessly to solve the country's problems. By 1877, it was clear that the nation's voters were no longer willing to use the army to protect the civil rights of the freedmen. Because a hostile Congress refused to provide adequate funds, Hayes re-assigned the few remaining troops guarding two Southern statehouses. Before doing so, however, he extracted promises from southern leaders that they would protect southern African Americans in their political, economic, and civil rights. He hoped his actions would heal the wounds left by the Civil War. His sound money policies helped make business and industry stronger. He initiated civil service reform, aimed at ending patronage, and appointed men with sound qualifications to government positions. He also signed a bill that, for the first time, allowed women attorneys to appear before the U.S. Supreme Court.

The President continued to be concerned with minorities, the poor, and immigrants. He believed that education and manual training would help all people achieve better lives.

Hayes' honesty and fairness renewed respect for the presidential office. Honoring his commitment not to accept a second term, Hayes retired to his beautiful estate, Spiegel Grove, in Fremont, Ohio. Here, Hayes continued to give his time helping veterans to receive their pensions, improving conditions in prisons, and promoting universal education. He died at Spiegel Grove on January 17, 1893, at the age of seventy.