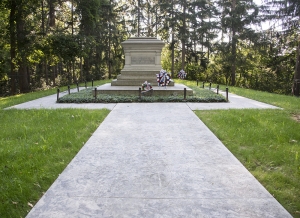 President and Mrs. Hayes are buried within the grounds of Spiegel Grove. A granite tombstone, made from granite quarried from the Hayes homestead in Dummerstown, Vermont, marks their burial site.

They were originally laid to rest in nearby Oakwood Cemetery, a public cemetery in Fremont, Ohio. While the the Hayes Museum/Library building was under construction in 1915, their remains were re-interred within the boundaries of Spiegel Grove. The wooded knoll on which the tomb is located was a favorite spot of the couple.

The President's son Webb C. Hayes, a Medal of Honor recipient, is buried next to his parents. Webb is responsible for the establishment of the Hayes Museum/Library.

Outside of the fence, there are stones commemorating the burial places of favorite animals and pets, including Old Whitey, a Civil War horse. 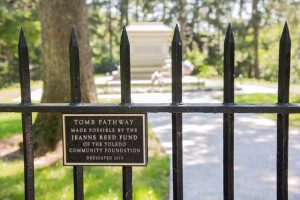