The other famous Hayes at The Ohio State University

Woody Hayes wasn't the only famous Hayes at The Ohio State University. The university owes it existence in part to 19th U.S. President Rutherford B. Hayes, who helped to found it when he was governor of Ohio and remained involved with the university until his death. 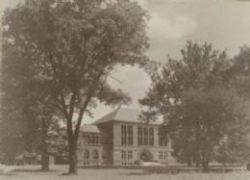 Rutherford B. Hayes’ involvement with The Ohio State University spanned more than twenty years. In his 1870 annual message, Gov. Hayes urged the Ohio General Assembly to pass a bill creating a land grant university under the Morrill Act of 1862. On March 22, 1870, the General Assembly passed a bill to establish and maintain the Ohio Agricultural and Mechanical College.

Gov. Hayes had the important task of appointing one trustee from each of Ohio’s nineteen congressional districts. He was careful to appoint members from both political parties to ensure bipartisan support. The first duty of the Board of Trustees was to chart the future of the university by choosing its president, its location, and the scope of its curriculum. At Hayes’ urging the trustees selected Columbus in Franklin County over sites in three other counties and approved a broad course of study rather than a narrow agricultural curriculum.

In 1887 ex-president Hayes was honored to accept Gov. Joseph Foraker’s appointment to the university’s seven-member board of trustees. In this capacity he was the university’s most effective advocate, appearing before the state legislature to fend off assaults to funding. In November 1892 Hayes’ fellow trustees rewarded him for his service by electing him president of the Board of Trustees. He presided over only one meeting - January 10, 1893. Later that week he was stricken in Cleveland while conducting business on behalf of the University. He died at Spiegel Grove on January 17, 1893.

"Meeting of the Trustees of The Ohio State University - Halls named - one Orton - one Hayes - pleased that it was done in my absence on motion of Dr. Schueller - Dem[ocrat], 2 Rep[ublicans], by unanimous vote!" Rutherford B. Hayes diary, November 18, 1891

Hayes Hall is listed on the National Register of Historic Places and is the oldest classroom building on The Ohio State University campus.

Hayes believed that all citizens could benefit from manual or industrial education. Even those who did not earn a living by working with their hands would learn an appreciation of labor that would promote understanding among the classes. Through his efforts the university created a manual training department in 1891 to train industrial education teachers.

" What is in the way of Manual Training? The lack of competent teachers. Here in our Manual Training Department is the Normal School - the place where teachers of M[annual] T[raining] are to be educated. " Rutherford B. Hayes note for speech February 17, 1892 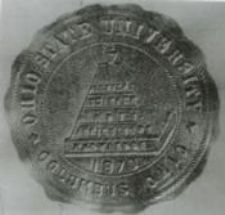 Joseph Sullivant, Secretary of the Board of Trustees, designed the first seal adopted by the Board on March 8, 1871. The pyramid represents stability and permanence, and the flame at the pinnacle is the lamp of knowledge

In 1939 the University adopted the current seal designed by Professor Thomas E. French. The new design includes the pyramid from the first seal with the addition of a shield, the letter "O," a book, and the Ohio buckeye. For more information on the seal, please click here.