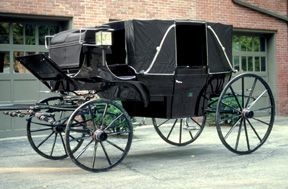 It seems men always have had a love affair with vehicles – even before the advent of cars. Rutherford B. Hayes was no exception. Soon after becoming our 19th President, Hayes bought a new carriage. It was made by Brewster & Co. of New York and, according to an article in the January 2010 issue of The Carriage Journal, was top-of-the-line.

“Brewsters were the highest quality vehicles made in America. The company became Rolls Royce in later years,” said Roger Murray of Tiffin, who along with his wife Sue penned the article titled "The President’s Turnout."

President Hayes used his elegant carriage for daily travel, often inviting Civil War friends and fellow politicians along for a ride. Among his passengers were Presidents Grant, Garfield, Arthur, Cleveland, and McKinley, as well as Generals Sherman, Sheridan, Scofield, and Hancock. Many important decisions of state were made in the carriage while President Hayes and his official guests were driving to and from the Capitol.

At the time Hayes was elected, presidents not only were responsible for paying their White House staff, but also had to provide their own transportation. The 19th President paid $1,150 for his Brewster, and purchased his new carriage on March 22, 1877. He also spent $1,700 for two pairs of black horses and $300 for harnesses.