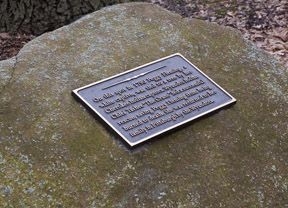 This story was copied from the Story of the Maumee Valley, Toledo and the Sandusky Region by Charles Sumner Van Tassel, Vol. 1

Charles Johnston, a Virginian of some note, in making a business visit to Point Pleasant on the Ohio River, while passing down that stream with a party of three men and Peggy and Dolly Fleming of Pittsburgh, was hailed by two white men, according to Johnson’s story, published in 1827, who implored to be taken on board and rescued from the Indians by whom they had been captured. These white men were simply used as decoys and when the boats containing Johnston and his companions approached the shore they were fired upon by a band of over fifty Indians. Dolly Fleming and one of the men were killed and the balance of the party, including Peggy Fleming, were taken prisoner. The date was March 20, 1789. The prisoners were separated and one of them, William Flinn, was burned at the stake on the Sandusky River. Another of the prisoners named Skyles was condemned to the same fate, the torture to take place on the Maumee River, but he made his escape to Detroit. The part of Johnston’s narrative concerning Peggy Fleming as related to Lower Sandusky is as follows: When they arrived at Upper Sandusky they met a Canadian trader named Francis Douchouquet who after much bargaining purchased Johnston from the Indians for 600 silver broaches. Says Johnston further: “The small band of Cherokees, three in number, to whom Peggy Fleming had been allotted in the distribution made of the prisoners on the Ohio, brought her to Upper Sandusky while I was there. She was no longer that cheerful, lively creature such as when separated from us. Her spirits were sunk, her gayety had fled; and instead of that vivacity and sprightliness which had formerly danced upon her countenance she now wore the undissembled aspect of melancholy and wretchedness. I endeavored to ascertain the cause of this extraordinary change, but she answered my inquiries only with tears; leaving my mind to its own inferences. Her stay with us was only for a few hours, during which time I could not extract a word from her, except occasionally the monosyllables of yes and no. Gloom and despondency had taken entire possession of her breast; and nothing could be more touching than her appearance. Her emaciated frame and dejected countenance, presented a picture of sorrow and of sadness which would have melted the stoutest heart, and such was its effect upon me that I could not abstain from mingling my tears with hers. With these feelings we parted. When we met again, it was under far different and more auspicious circumstances, as will hereafter be seen.

“Mr. Duchouquet sold his goods and collected his peltry at Upper Sandusky. The season had arrived for transporting his purchases to Detroit; and with a light heart I began the journey to that post in his party. The Sandusky River is not navigable from the upper town; and Mr. Duchouquet’s peltry was carried on pack horses to Lower Sandusky; whence there is a good navigation to Detroit. When we reached Lower Sandusky, a great degree of consternation prevailed there, produced by the incidents of the preceding day, and of the morning then recently past. The three Cherokees, who had possession of Peggy Fleming, had conducted her to a place where they encamped, within a quarter of a mile’s distance from the town. It was immediately rumored that there they were, with a white female captive. The traders residing in the town instantly determined to visit the camp of the Cherokees and to visit her. Among them was a man whose name was Whitaker, and who was like the one I had met at Upper Sandusky had been carried into captivity from the white settlement by the Wyandots in his early life. He was not so entirely savage as the first; could speak our language better; and though naturalized by his captors retained some predilection for the whites. The influence which he had acquired with his tribe was such that they had promoted him to the rank of chief; and his standing with them was high. His business had led him frequently to Pittsburgh where the father of Peggy Fleming then kept a tavern in which Whitaker had been accustomed to lodge and board. As soon as he appeared with the other traders at the camp of the Cherokees, he was immediately recognized by the daughter of his old landlord, and she addressed him by his name, earnestly supplicating his efforts to emancipate her from the grasp of her savage proprietors. Without hesitation he acceded to her requests. He did not make an application to the Cherokees but returned to the town and informed the principal chief, distinguished by the appellation of King Crane, that the white female captive was his sister; a misrepresentation greatly palliated by the benevolent motive which dictated it.

“He had no difficulty in obtaining from the King a promise to procure her release. Crane went immediately to the camp of the Cherokees; and informed them that their prisoner was the sister of a friend of his, and desired as a favor that they would make a present to him of Peggy Fleming, whom he wished to restore to her brother. They rejected his request. He then proposed to purchase her; this they also refused with bitterness, telling him that he was no better than the white people and that he was as mean as the dirt; terms in the grossest reproach of their usage of them. At this insult Crane became exasperated. He went back to the town; told Whitaker what had been his reception and declared his intention to take Peggy Fleming from the Cherokees by force. But fearing such an act might be productive of war between his nation and theirs, he urged Whitaker to raise the necessary sum in value for her redemption. Whitaker, with the assistance of the other traders at the town, immediately made up the requisite amount in silver broaches. This was not accomplished until it was too late to effect their object on that evening. Early next morning King Crane, attended by eight or ten young warriors, marched out to the camp of the Cherokees, where he found them asleep, while their forlorn captive was securely fastened, in a state of utter nakedness, to a stake; and her body painted black; an indication always decisive that death is the doom of the prisoner. Crane, with hisscalping knife cut the cords by which she was bound; delivered her the clothes of which she had been divested by the rude hands of the unfeeling Cherokees; and after she was dressed, awakened them. He told them in preemptory language that the captive was his, and that he had brought with him the value of her ransom. Then, throwing down the silver broaches on the ground, he bore off the terrified girl to the town, and delivered her to Whitaker; who after a few days sent her, disguised by her dress and paint as a squaw, to Pittsburg, under the care of two trusty Wyandots. I never learnt whether she reached her home or not; but as the Indians are remarkable for their fidelity to their undertakings, I presume she was faithfully conducted to her place of destination.

“The Cherokees were so incensed at the loss of their captive, that they entered the Wyandot town of Lower Sandusky declaring that they would be revenged by taking the life of some white person. This was the cause of the alarm, which was spread among the traders at the time of our arrival, and in which our party necessarily participated it was indispensable that we should remain there several days for the purpose of unpacking Mr. Duchouquet’s peltry from the horses, and placing it aboard the batteaux in which it was to be conveyed to Detroit. The Cherokees painted themselves, as they and other savages are accustomed to do when they are preparing for war or battle. All their ingenuity is directed to the object of rendering their aspect as horrible as possible, that they may strike their enemies with terror and indicate by external signs the fury that rages within. They walked about the town in great anger, and we deemed it necessary to keep a watchful eye upon them and to guard against their approach. All the whites, except Whitaker, who was considered as one of the Wyandots, assembled at night in the same house, provided with weapons of defence, and continued together until the next morning; when to our high gratification they disappeared and I never heard of them afterwards.”