In 1873 there was an economic crisis in the United States. Several major banks collapsed and created what is known as the “Panic of 1873” which caused the country to enter a depression. In an attempt to bring the nation out of the depression, the Coinage Act of 1873 was passed. This act embraced the gold standard and demonetized silver, which previously had been the standard. Silver miners became irate at this change and demanded a return to the silver standard. The answer to the Coinage Act did not come until 1878 when the Bland-Allison Act was introduced to Congress. The purpose of this act was to bring back the silver standard. It also required the purchase of silver bullion by the Secretary of the Treasury for use in coining. The price of the bullion was controlled and a minimum requirement established for the amount of silver purchased each month. The primary issue with returning to the silver standard was that silver was losing value. This meant that at one point the face value was higher than the metallic value of the coin.

On February 28, 1878 President Rutherford B. Hayes vetoed the Bland-Allison Act. His concern was that the bill would negatively impact the ability of the U.S. to fulfill monetary contracts. He was alarmed that debts incurred during the time of the gold standard would be forced to accept a less valuable metal as payment. He also worried about public credit if the bill was passed. Hayes put emphasis on the reduced value of the coin, stating that the bill exaggerated the worth of the silver coins by 8 to 10 percent. Congress overrode his veto, and the Bland-Allison Act became law.

Preparation for a new silver coin began before the Bland-Allison Act was passed. Henry P. Linderman was the Director of the Mint in 1877. He ordered Chief Engraver William Barber and one of his assistants, George T. Morgan, to design new coins. Their designs were judged and the best one was chosen to be the next silver coin. The winner was Morgan. Morgan used a friend named Anna Willess Williams as his model for the Lady Liberty side of his coin. He placed an eagle on the back side that created controversy. The coin acquired the nickname of the “buzzard dollar” because the eagle was considered scrawny. There was another issue concerning the tail feathers on the eagle. Traditionally there were seven tail feathers, but Morgan put eight on the initial design. This led to some of the original coins being collected and recast with seven feathers, although some of the coins with eight feathers remained in circulation.

The coins, originally known as the "Bland" dollar, were produced from 1878 until 1904, with more than half a billion being struck. In 1921, eighty-six million Morgan Silver Dollars were made. However, they did not add to the overall number of coins due to the Pittman Act, which resulted in more than 270 million coins (mostly Morgan Silver Dollars) being melted down. 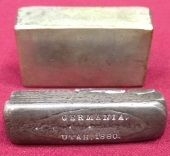 Despite his decision to veto the Bland-Allison Act, President Hayes expressed a desire to possess the first-struck Morgan Silver Dollar. The Director of the Mint wrote instructions ordering James Pollock, who was the Superintendent of the Philadelphia Mint, to obtain the first and second pieces, along with a certificate authenticating their status as such. The coins were created on March 11, 1878. Their creation was recorded in an article in the Cincinnati Commercial newspaper two days later. That stated that the coin received by President Hayes was not actually the first coin created, but rather the first coin suitable for circulation. The first coin struck was deformed and had to be melted down. (The article also made note of the fact that the coin would be known as the veto coin in honor of the president's attempt to halt the legislation.)