Home / The Estate / Museum / About the Museum 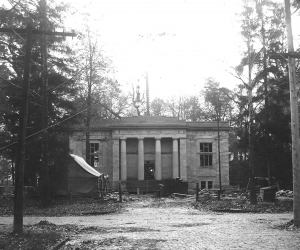 At the turn of the 20th century, Rutherford and Lucy Hayes’ second son, Col. Webb Cook Hayes, led the effort to found the museum and library at the Rutherford B. Hayes Presidential Library & Museums.

Webb and his siblings deeded their parents’ estate, called Spiegel Grove, and all of its holdings to the state of Ohio. They broke ground on the museum/library building in 1912, and Webb and the state of Ohio paid for construction of the building.

Numerous problems and challenges arose during the construction process; however, Webb persevered and the museum and library opened on Memorial Day 1916.

Major additions were added in 1922 and 1968. In 2016, the museum was completely renovated with the addition of all-new exhibit galleries with interactive components and a new, handicapped-accessible main entrance.

The building has four floors – two for the museum exhibit galleries, one for the research library and one for storage – and comprises 52,640 square feet. In keeping with HPLM’s mission, the museum uses its resources to illustrate the life and times of Rutherford and Lucy Hayes, their family, and Ohio history. HPLM has 20,915 artifacts, and 2,051 are on permanent display.

Rutherford B. Hayes became president after one of the most contested elections in U.S. history. The election, and its conclusion, are subjects of continued scholarly debate. Throughout his presidency, Hayes worked to unite the country behind him and to bring together the North and South, which remained deeply divided after the Civil War.

He faced numerous major issues, including the end of Reconstruction and its aftermath, and the plight of American Indians. His major concerns were civil service reform, returning the nation’s currency to a gold standard, and education.

Before he took office, Hayes publicly said he would only serve one term, and he returned to Spiegel Grove after completing his term.

Hayes believed strongly that an ex-president should continue to serve his city, state and country. After he and Lucy left the White House, they remained active in local and national affairs. On a national scale, they participated in veterans’ affairs reform and worked to help orphans, including children of soldiers. Rutherford also traveled extensively to promote prison reform and continued his lifelong mission of furthering access to scholastic and vocational education for all, no matter their race or socioeconomic status.

On a regular basis, the museum staff creates temporary exhibits on historical topics relating to the presidency and Rutherford and Lucy Hayes, including the Hayes administration, the Gilded Age, the Civil War, first ladies and Ohio History. HPLM also rents or borrows temporary exhibits that are appropriate to its mission.

Rutherford B. Hayes was a history enthusiast who collected historical artifacts and saved his letters, diaries, and other documents. He believed these items could connect a person to a place and time like nothing else.

HPLM houses more than 20,000 three-dimensional objects and more than 30,000 images of these objects. 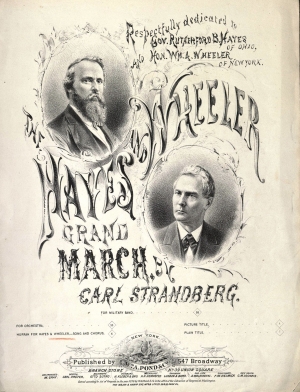 Some of these items were collected by Hayes. Other items belonged to him and Lucy, their family, and donors located throughout the United States.