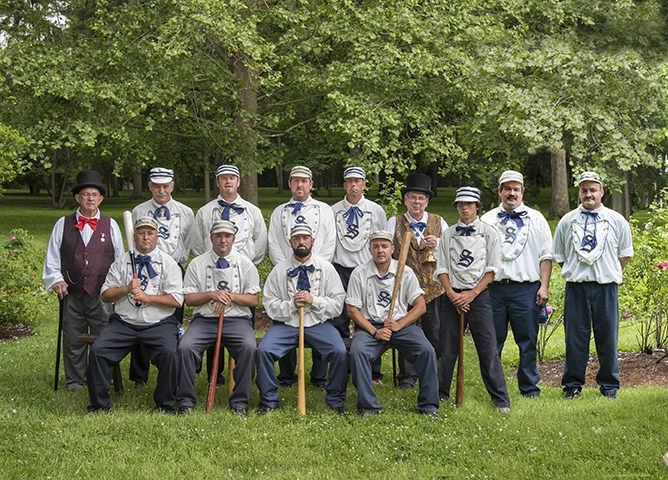 The Spiegel Grove Squires are baseball devotees who bring to life the sport during its early years. It was in the 1860s that base ball, as it was spelled back then, became an organized sport with rules of play and standards for base ball clubs.

Members of the Spiegel Grove Squires are volunteers. They have studied and learned the methods of play used in the 1860s, including playing bare-handed and using a bat that looks more like a broom handle. Players are called ballists, and they wear period-style uniforms and adopt the language of 19th-century base ball during their matches, as games were called back then. The club dates back to 1991, became inactive in 1998 and restarted in 2001. Since then, it has been consistently active.

The team has a full schedule, including several home games at Spiegel Grove, the grounds of the Rutherford B. Hayes Presidential Library & Museums. Admission to home games is free. Home games take place on the lawn behind the Hayes Home. The Squires are sponsored by Wright Leather Works.

The Rutherford B. Hayes Presidential Library & Museums is America’s first presidential library. It is located at Spiegel Grove at the corner of Hayes and Buckland avenues in Fremont, Ohio. The facility is affiliated with the Ohio History Connection.