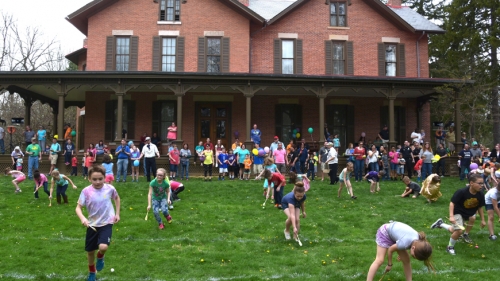 Kids are invited to an afternoon of fun on Saturday, April 11, at the annual Hayes Easter Egg Roll, which replicates the White House Easter Egg Roll that Rutherford B. Hayes started when he was president.

The event is for kids ages 3-10 and is from 2 to 3:30 p.m. on the lawn of the Hayes Home at the Rutherford B. Hayes Presidential Library & Museums at Spiegel Grove.

Admission is free. Kids are asked to bring three hard-boiled, colored eggs for use in traditional egg games like those played at the White House Easter Egg Roll.

Prizes in the egg games are awarded in six age categories, and each kid receives a balloon and treats. Additionally, the Easter Bunny will make an appearance.

There will also be face painting, cornhole games, story time and craft activities. Kids also can bring a hard-boiled, decorated egg to enter in an egg-decorating contest.

President Hayes started the first White House egg roll in 1877. Before that, kids played egg games on the grounds of the U.S. Capitol building on Easter Monday. Congress, however, banned the event because of the mess.

Hayes Presidential has offered its egg roll since 1986.