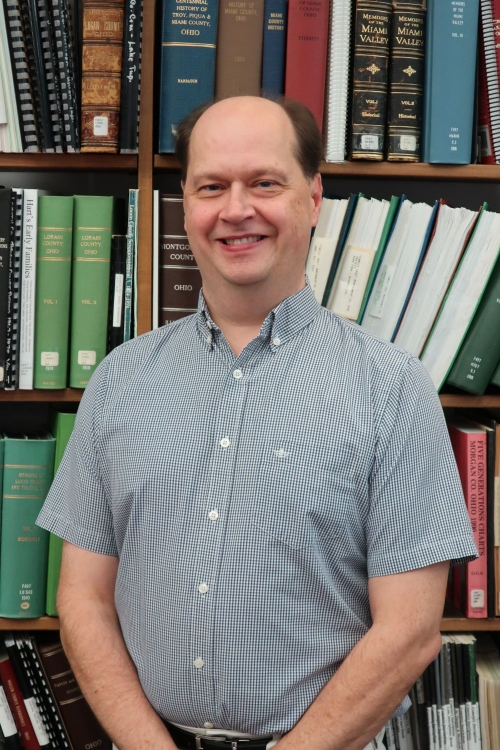 A long-time employee of the Hayes Presidential Library & Museums who has extensive experience with the library collections and research has been promoted to head librarian.

John Ransom, who served as interim head librarian for 11 months before being promoted last week, oversees the library operations and staff and works with patrons on their research questions. He has worked for the Hayes Presidential Library for the past 23 years.

“This is a great place to work,” Ransom said. “It’s a unique job. There are not too many jobs where you’re a librarian, work with genealogy and do it all at a presidential site.”

Ransom oversees two librarians and six volunteers. He catalogues new books, which he works with other staff members to order, related to President Rutherford B. Hayes, the Civil War, local history and other relevant topics.

He answers in-person and email questions from patrons seeking help with local history, genealogy and other research topics. He also oversees maintenance of President Hayes’ more than 10,000 personal books, as well as the library’s periodical and newspaper collections.

“John has become an expert in our book, periodical and newspaper collections as well as a respected genealogy guru,” said Christie Weininger, Hayes Presidential executive director. “I often receive compliments from library patrons about the library staff.  As one patron said: ‘The Rutherford B. Hayes Presidential Library & Museums holds a special place in my heart due to the efforts of staff members like John.’”

Ransom enjoys working with the patrons and the books, manuscripts and artifacts at Hayes Presidential.

“Everybody has a different story to tell about their family,” he said of the patrons. “I like hearing their stories. I like helping people. You can help them find their long-lost relative they’ve been trying to find for years.

His favorite artifact is the Waggoner sword, which belonged to John Waggoner, who settled in the Fremont area after serving as a body guard to George Washington. The sword, was displayed in a case in the library at one time.

Ransom replaces Becky Hill, who retired last year and works one day a week in the library.

“Becky was a good mentor who helped to prepare me for this job,” Ransom said. “We have a great staff here. Everybody works together well and pitches in whenever needed.”
Ransom started at Hayes Presidential in 1994 as a volunteer in the museum, where he cataloged artifacts and helped with exhibits. That’s when he met his wife, Brenda, who was working as a part-time cataloguer for the museum.

In addition to working in the library, Ransom has helped plan events, such as the Frohman Summer Series: Hands-on History, genealogy classes and History Roundtable with Mike Gilbert. He also volunteers his time at Verandah Concerts and Christmas dinners in the Hayes Home.