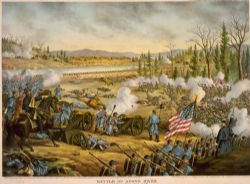 The Robert Caldwell Papers consist of a series of Civil War era letters, primarily from Robert Caldwell of Elmore, Harris Township, Ottawa County, Ohio . The original letters are part of the Rutherford B. Hayes Presidential Library's much larger William Caldwell Family Collection (LH-71). Photocopies of the Robert Caldwell correspondence were donated to the Center for Archival Collections, Bowling Green State University, where transcriptions were prepared.

Robert H. Caldwell was born on June 14, 1841, the son of William and Jane ( Davis ) Caldwell. Robert was one of four children, with two brothers and a sister. William C., the oldest brother, served with the 72nd Regiment, O.V.I. as hospital steward and assistant surgeon. Charles, the middle brother, died in 1852 at the age of 13. Juliet, the sister, studied at Oberlin. Robert worked for his father, a lumberman, at the family's mill. At the age of twenty, Robert joined the 21st Regiment, Ohio Volunteer Infantry, and was appointed 3rd corporal of Company I. He was promoted to sergeant on June 7, 1862. In August, he was sent home on a recruiting mission. He rejoined the 21st in mid November. At the Battle of Stones River, he was wounded. He died in the hospital on February 8, 1863.

The Civil War correspondence of Robert H. Caldwell consists of 114 letters written by Caldwell to various family members from September 1861 to February 1863. Three of the letters are from his brother William, serving with the 72nd O.V.I., with one letter each from Robert's mother Jane, his uncle John Davis, and Amos Wood, also of Company I, 21st Ohio Volunteer Infantry. The letters after Robert's death are between various family members expressing their sympathy to each other.

Sept 15, 1861-Jan 14, 1863
Arranged chronologically
A series of 114 letters to members of his immediate family, while he served with the 21st Regiment, Ohio Volunteer Infantry, Company I, during the Civil War

Jan 18-Feb 23, 1863
Arranged chronologically
A series of six letters from members of the Caldwell Family, expressing sympathy for the death of Robert